“What was unique and very very helpful was to have the connection to the vessel. We could see when the ship was getting close to the Azores and it was a delight to see that far ahead of landing in Livorno. Unlike the information carriers provide, we enjoyed having all the tracking updates in a single dashboard.”

During our time working with CoLoadX and Intermodal Sciences, we were able to provide a high-level tracking service to cover all the stages of order fulfilment.  CoLoadX is a high-frequency freight marketplace providing instant search, booking, and real-time rich data. Intermodal Sciences is a company that has developed Smart Bags providing real time supply chain visibility and product integrity for high value commodities, including agricultural, mined and manufactured products. Together we covered all the stages of the order fulfilment.

We established a co-development type of relationship, where all of us learned from our experience. The main goal was to provide accurate tracking, and a reliable estimated time of arrival of the goods to the destination in Italy. By combining our expertise in various fields and working together we cleared the problems that the client needed solved: shipments visibility and transparency.

Tracking started at the CoLoadX office in California. The eShell was sent to Columbus, Ohio in the US where a container was loaded with the cargo. Until then they just wanted to make sure the eShell was accurate and reliable, and it definitely was. There in Columbus, the eShell was in seconds attached to the inside of the container, where the export journey began.

Throughout the asset’s journey from its origin in Columbus, Ohio, to the Port of Livorno, Italy, CoLoadX was able to track the journey across land and sea, as well as understand the data around the wait time outside different key points like the port of Livorno. Like every journey that an asset undergoes in international trade, this one had a ‘first-mile’. However, in this case, the ‘first mile’ was travelling on land across the whole of the United States of America, from west coast to east coast, and the location was accurately provided during the whole of the journey.

With the client able to set the frequency of the updates to as little as every five minutes, they were always given a precise location and temperature of their assets. By using Shellock’s eShell and integrated platform in conjunction with the vessels’ data, CoLoadX were easily able to forecast the route of the asset’s journey and the ship’s ETA. Our platform allowed them to then track their assets across the Atlantic Ocean and Mediterranean Sea until it reached the Port of Livorno, Italy. Before entering Livorno, the ship was stationary for a period of time before being allowed to enter, making the journey time even longer than anticipated. However, they were able to log on to the platform and locate their shipment with few clicks.

Due to the notifications from the eShell onboard the ship which provided location data, CoLoadX was able to see in a single dashboard when the container was stationary and the container status was still onboard the ship. Without this, the involved stakeholders in this shipment would have had to access different portals to try to understand what was the actual status of the transport and its actual location. 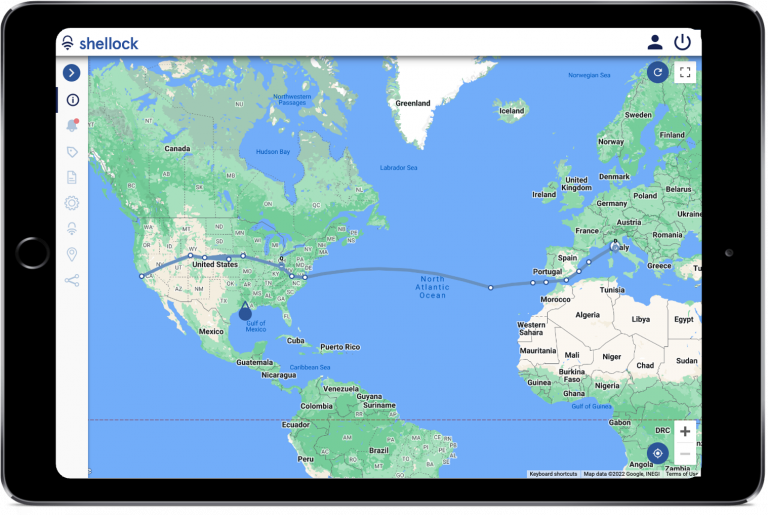 Access to Shellock’s platform and the data within it saved a lot of time and stress for CoLoadX, Intermodal Sciences and the end customer, reducing the reliance on manual calls and emails to relevant parties along the process when a location status was needed. This provides 100% Return on Investment as the team were able to focus on other tasks, in full knowledge about where the shipment was and that its status was intact.

Once the shipment was delivered, Petere was able to pick up herself the eShell from the container in Livorno and take it back with her, ready to track the next shipment.

This website uses cookies to improve your experience while you navigate through the website. Out of these cookies, the cookies that are categorized as necessary are stored on your browser as they are essential for the working of basic functionalities of the website. We also use third-party cookies that help us analyze and understand how you use this website. These cookies will be stored in your browser only with your consent. You also have the option to opt-out of these cookies. But opting out of some of these cookies may have an effect on your browsing experience.
Necessary Always Enabled
Necessary cookies are absolutely essential for the website to function properly. This category only includes cookies that ensures basic functionalities and security features of the website. These cookies do not store any personal information.
Non-necessary
Any cookies that may not be particularly necessary for the website to function and is used specifically to collect user personal data via analytics, ads, other embedded contents are termed as non-necessary cookies. It is mandatory to procure user consent prior to running these cookies on your website.
SAVE & ACCEPT